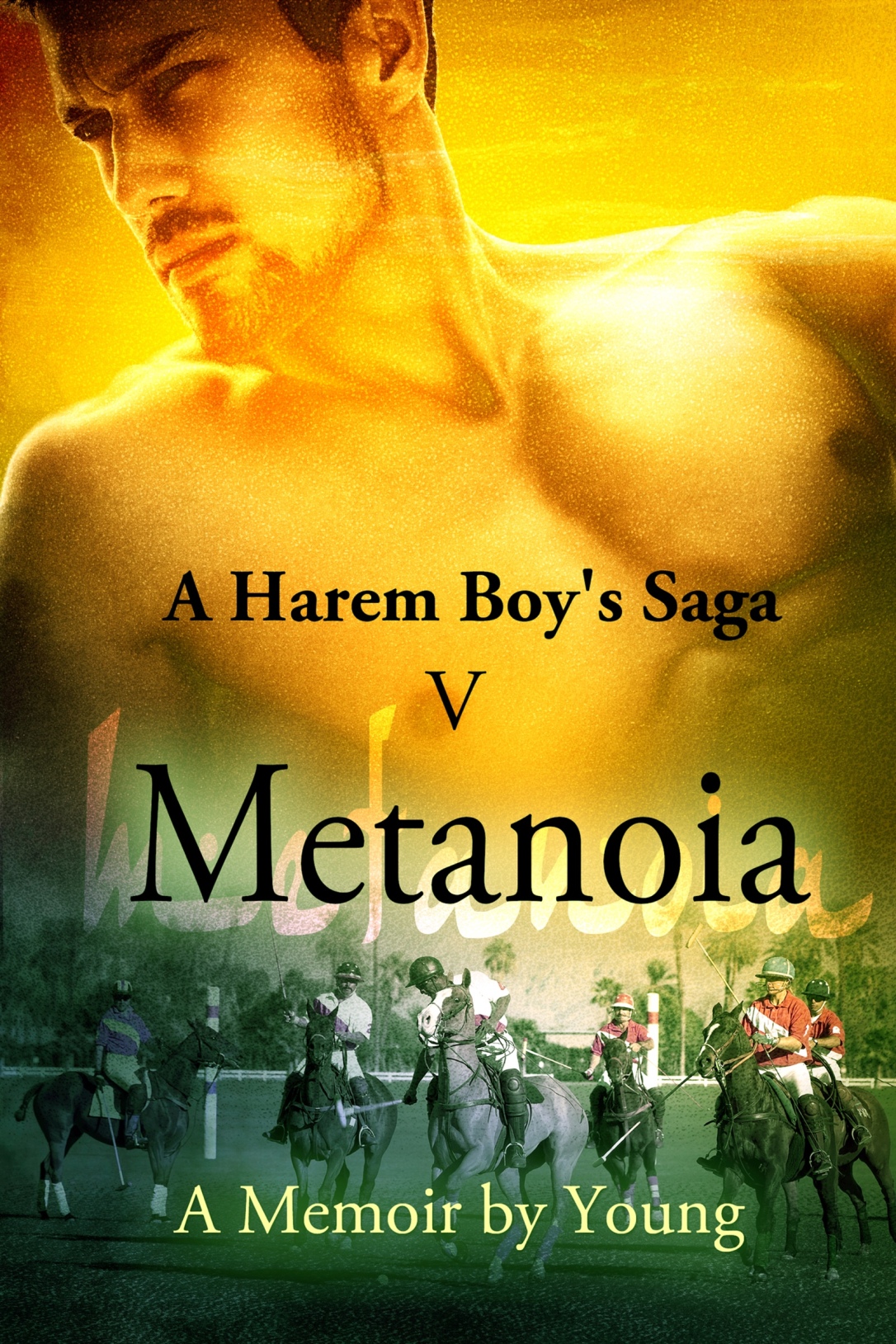 A Harem Boy’s Saga – V – METANOIA; a memoir by Young is the 5th and final volume to a sensually captivating autobiography about a young man coming of age in a secret society & a male harem.

Synopsis
Metanoia is the fifth and final volume to A Harem Boy’s Saga; a memoir by Young (five-book series). This erotically sensual and captivating autobiography is about a young man coming-of-age in a secret society before being spirited away to serve in several Middle Eastern male harems.
Metanoia follows Young and Andy’s (the young man’s lover-cum-chaperone) journey to their fifth Arabian Household at the opulent residences of their patriarch, Tad; an athlete of international fame. Although the couple had to maneuver through a minefield of explosive sentiments, they also acted as their “Master’s” confidante as they move through the world of the wealthy and elite.
This book is steeped in preternaturalism and spirituality. It is enlighteningly educational in the Middle Eastern way of life and the different aspects of Arabian culture.
This memoir is also an epic love story between Young and Andy. The joys and pleasures together with the trials and tribulations that come with heroic and unconditional love.
A Harem Boy’s Saga; a memoir by Young (book series) is in Film Option contract.

I was tossed about in the tiny confines of Murashshahaan (Running Mate), Sheik Fahrib’s eleven meters’ sailboat. A month before the races the doctor had transported this top of the line vessel from its mooring facility in Musandam Dibba Al Hisn, the Sultanate of Oman to Acapulco; in readiness for the 1968 Summer Olympics yachting competition. Tad (his team-mate) and he had been out daily to acclimatize to the sailing conditions in this Mexican playground of the rich and famous. A week preceding the competition, my Valet and I left from Daltonbury Hall to join them. With our Assalamu Alaikum service behind us, Andy and I needed the repose, to revivify our love and friendship. Our summer vacation was spent traveling around the tranquil English countryside, soaking up the beauty of the Lake District and getting reacquainted with one another. We needed to necessitate our physical and mental bond before departing to Aldhdhib Dann ( وكر الذئب Wolf Den) and Manarat Lilddaw’ ( منارة الضوء Beacon of Light); Tad Abdul Hafiz’s London and Riyadh residences. The both of us had a hunch that our services at our fifth household would not be as smooth sailing as compared to our previous assignments.
Much like Count Mario, Tad was a playboy at heart. His irrational and spur of the moment decisions often send those close to him into dramatic tailspins of immense proportions. It was under this circumstance I now found myself at the mercy of howling winds, roaring waves and pounding rain. Thrown repeatedly from the hull to the rear of this racing vessel. The vicious waves and torrential downpour lapped at my person. Not only did I puke up the gastronomical contents I had consumed not so long ago, but I also had to hold on for dear life in the unfortunate event I would be swept into the ocean. Seasickness had overtaken my person, and no help was available since every strong hand was working furiously to keep Murashshahaan afloat. Hard-pressed at the helm, the sheik steered his vessel away from colliding rocks while Tad and Andy held firm on either side of the riggings to steady the dinghy; in the unfortunate event that the mast should collapse under the onslaught of the ferocious winds. Within this treacherous weather condition, I was left to fend for myself. Not knowing how long this perilous dilemma would last, I rocked, slid and vomited while keeping myself from slipping into the abyss of this bottomless ocean. Suddenly, a hand reached for my collar to pull me away from the slippery taffrail. I was dragged into the boat’s cabin that was now filled with ankle-deep water. As if I had gone bonkers the sportsman glared at me transfixed.
“What in the world were you doing on deck. You were repeatedly told to stay below. This is not a time to tamper with the forces of nature. You could have been swept into the ocean and drown!” he chastised sternly.
“You, Fahrib and Andy are above deck…,” I muttered meekly.
He scowled at my defiance.
“We are experienced seamen and you, boy, is not,” he admonished. “The last thing we want on our hands is your dead body floating in the water.”
“Andy isn’t an experienced sailor,” I negated truculently.
He raised his hand to land me a slap for being an insolent brat. Before his hand could touch my cheeks, the boat’s violent oscillations hurled us in opposite directions. I crushed against the bulkhead while the athlete pulverized onto a dividing panel. Before he left me to my own expedient, his grimace had sent chills across my trembling body. When we finally came ashore, search teams were already scouring the vicinity for distressed boats adrift at sea. The Running Mate was indeed one resilient lady whose damage was next to none. Thanks to our two experienced yachtsmen, we were relatively unharmed. Besides some minor bruises and concussions, the four of us were up and running after a good night’s sleep. I did not relate to my Valet what transpired in the cabin. After all, I conceded I was in the wrong and shouldn’t have put myself and crew in harm’s way, causing further perturbation if I should indeed fall into the turbulent waves. That would have been an unforgivable disaster. 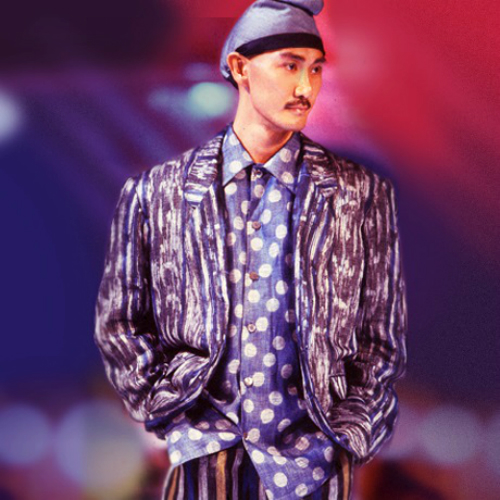 Author’s Bio
Young alias Bernard Foong is, first and foremost, a sensitivist. He finds nuance in everything. To experience the world, he inhabits is an adventure which is mystical, childlike and refreshing. He has a rare ability to create beauty uniquely. His palettes have been material, paint, words and human experiences.
By Christine Maynard (screenwriter and novelist).
Bernard Foong (designer) – A brief history
Born in Kuala Lumpur, Malaysia. At the age of 8, he was assisting his aunt and cousin, learning the art of sewing and fabrics/colors matching. He attended an exclusive private boarding school in the United Kingdom before obtaining his Diploma in Fashion Design at the Harrow College of Art & Technology in London, England. He went on to complete his Master of Design at the Royal College of Art & Design, London, England. During his college years, he won several international fashion awards and was already retailing bridal and evening dresses to several well-known department stores in England. Liberty of London, Selfridges, Harrods, and Harvey Nichols to name a few that carried his designs. His Royal College of Art graduation wedding/evening wear collection was sold to Liberty of London and displayed in their store windows for the entire month of June that year.
For four years, he worked for Liberty’s bridal department as their in-house designer until a trip to Hong Kong, while working on a freelance project for ‘Bird’s’(casual wear) company, he was recruited by the Hong Kong Polytechnic University as their Fashion professor for the next 6 years. During his stay in Hong Kong, he freelanced for numerous fashion companies. From designing casual wear, swimwear, lingerie, and fur garments, men’s wear, bridal and evening fashions to accessories (bags, shoes, and head-wear). He also participated in and organized numerous fashion shows, events, functions, and presentations in the Asia Pacific region.
Working for Keys Far East Hong Kong as chief lingerie designer – traveling extensively to the United States, he was soon recruited as an Associate Fashion Design/Illustration Professor to the University of Wisconsin, Madison and also lectured at the Minneapolis College of Art & Design for a couple of years.
Foong was then appointed as the Fashion Development Manager by an established department store – Parkson Grand (22 stores in Malaysia and one in Shanghai, China). Producing under the label, Natural Life by Bernard Foong, he designed casual-wear collections for the Parkson Grand’s flagship store in Kuala Lumpur. After a couple of years later, he was invited by the Temasek Polytechnic, Singapore to join their design school to establish a Fashion Design department. For two years, he assisted several founding members of the design school – working on the fashion department’s teaching curriculum.
The Fitzgerald Theatre Department, University of Hawaii, Manoa, Oahu, Hawaii awarded a full scholarship for Foong to complete his second Master of Art in Theatre Costuming. Now a resident of the United States, he has assisted many charity organizations in their fundraising events with his extravagant fashion and performance shows/presentations. In 2005, he and his husband, Mr. Walter Jay Bissett opened Fire Dragon Bistro Orient & Design Shop. He also designs costumes/fashions for numerous theatrical productions locally and abroad.
Appointed as the chief lingerie designer for Cerie International Limited – Hong Kong, his lingerie designs can be found in major department stores in Canada and the United Kingdom.
He showcased the BERNARD FOONG R-T-W collections and BERNARD FOONG @ Modern Classic Ltd. (an established – Hong Kong bridal & evening wear company) collections in Hong Kong. His 2008 & 2009 bridal/evening/bridal lingerie fashion show, “Grace” & “Coming Up Roses” were premiered at Hong Kong Fashion Week in July 2007 and January 2008 respectively at the Hong Kong Convention & Exhibition Center, garnering definite interest in many Asian press reviews, including a China nationwide television broadcast of his latest collection. Aika (International Opera Singer) wore several Bernard Foong special occasion dresses at her Japan & European tour in September & October 2009.
Foong was appointed as the Chief Creative Director for Official (Special Occasion fashion manufacturing company) Guangzhou, China producing – BERNARD FOONG Couture (specialty one-of-a-kind creations), White (RTW – Wedding/Special Occasion wear), Foxy Cute (Smart Casual/Cocktail wear), SexZ Things (decorative bustier) & Diva Bitch (sexy erotic wear) collections.
Foong just completed his autobiographic five-book series of Mr. Foong’s young life: 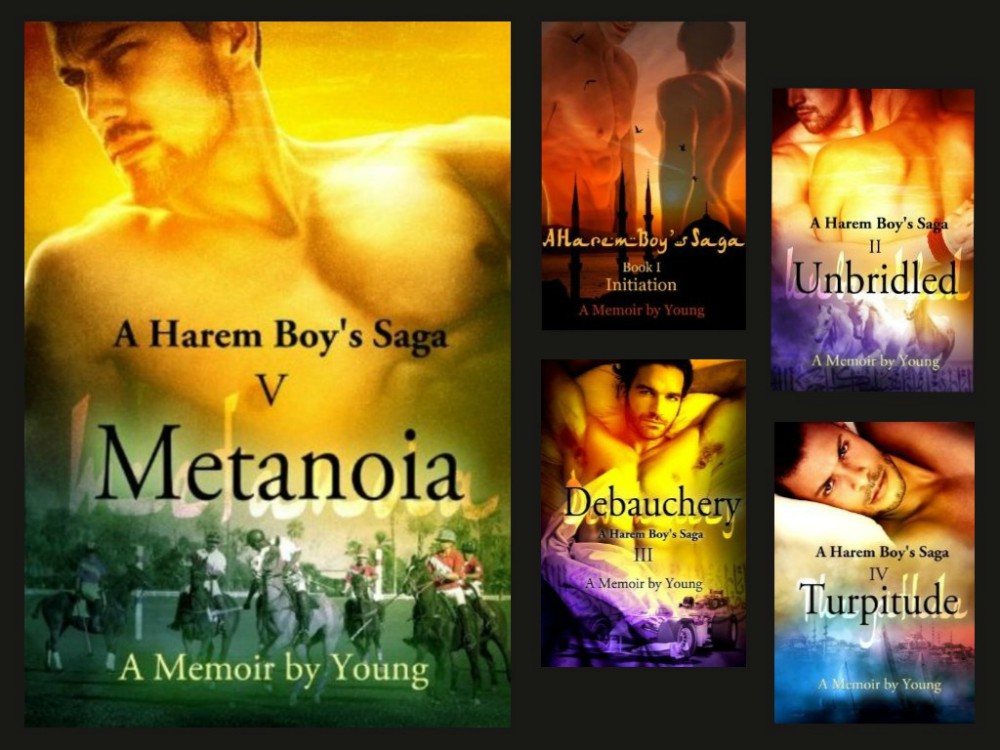