Today I’m sharing two hot excerpts with you! The first is from Prinal Heat my tiger shifter novella which is just $.99 on Amazon. The second is from Her Stern Doctor a deliciously naughty tale. Happy reading! ~Mo

“Corner now!” Quinn barked from behind her making her jump and run to the closest one where she immediately planted her nose.

She could hardly believe she was standing in a corner like a naughty child completely bare from the waist down.

Her stinging red bottom showing to the room at large, the thought was mortifying but even as a blush stole into her cheeks another heat invaded between her thighs with a jolt. Kyra’s eyes widened with surprise to realize how wet she was and as she stood there more and more moisture leaked down her inner thighs.

She couldn’t begin to imagine what Quinn would think.

“Are you thinking about how naughty you’ve been?” he asked from directly behind her.

Kyra blinked, actually her behavior was the furthest thing from her mind. She was thinking about her hot bottom and the heat that permeated her core…the hot, throbbing wet need that seemed to consume her…

“I asked you a question young lady. Kyra?” he swatted her bottom, a tinge of exasperation in his voice.

“What was the question?” she asked.

“Are you thinking about how naughty you’ve been?” Quinn asked again.

“Sure,” Kyra hedged, who wanted to admit to a man that had just spanked your bum that you’d really like to jump his bones now and do the nasty. Four more sharp smacks landed. “Owww…I’m sorry…I just can’t seem to focus.”

He chuckled, “Just what may I ask are you thinking about?”

Her head fell against the wall with a thump as she groaned with embarrassment, “I…please don’t make me say it…”

She gasped when to long fingers slid into her from behind almost lifting her up on her toes as they drove deep into her wet heat. “How wet my naughty little mate is,” he said as he used his other hand to push her hair off the back of her neck so his lips could nuzzle there.

Kyra moved her legs further apart as she began to ride his fingers helplessly, when his teeth closed over the back of her neck in a sharp nip she came apart with a soft little mewling cry.

“There’s a good girl,” Quinn said as he pulled his fingers free from her grasping sheath. Turning her limp body to face him Kyra looked up at him from her slump against the wall and watched as he licked her essence from his fingers.

The sight almost sent her over the edge again, it was hypnotic the way his eyes held hers as he licked each finger then stuck them in his mouth to suck them clean. When he was finished he used the same fingers to trace her lips lightly, they were still warm and moist from his mouth.

Kyra groaned, caught completely in his spell. She wanted to drop to her hands and knees and beg him to take her. “Please…” she whispered with a shuddering sigh of need.

Quinn smiled, “Soon…pet…soon but first we have to finish your punishment. You ran from me.”

She thought about it for a minute and realized he was right; the fear of mating heat and being claimed by Quinn was gone. Kyra was ready for him to claim her and everything that entailed.

Then he leaned down and picked a heavy strap up from the floor at his feet, Kyra felt her eyes widen as she took in the business end.

“Please…I’ll be good…I won’t ever run from you again…I…,” she pleaded but he put his fingers to her mouth to halt the flow of words.

“Shhh, I’m sure you will do your best to be a good girl for me Kyra and I know for a fact you won’t run from me again because I intend to make sure of it. Do you have any idea how it felt to come into the meadow and see my mate cornered by a cougar?” 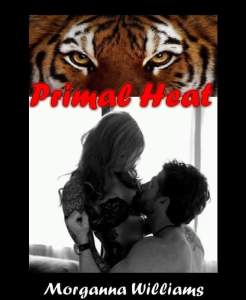 Kyra just wants to be left alone by the shifter community. She doesn’t want to take on a mate and she certainly doesn’t want to be forced into submission by some overbearing hulk of a creature. Yet her twin sister Kalypso is taking matters into her own hands. She knows Kyra’s destined mate (the tiger shifter Quinn) and with a little subterfuge, gets him to agree to kidnap her for a weekend fantasy. The problem? Kyra has no idea and she won’t be pleased. For Kalypso’s plan to succeed, Quinn will have to force out the inner shifter through some well needed spanking. This weekend is about to get real hot real fast.

The Pirate Argus Fletcher gets caught up in a wild tale of epic proportions. What starts out of just a hurricane coming for Lost Haven turns into much more when he discovers Jormungandr, the World Serpent is creating it. With the help of everyone’s favorite Lust demon Roxanne, a talking sword, and mermaids more interested in breeding than anything else, Argus may have a chance. The high seas await matey, so come join the captain of The Black Cat – Argus Fletcher, the Merciless.

“Did I give you permission to come?” he asked.

“No, but I couldn’t help it,” Kendra said softly.

Derek rose up on his knees, pushed the back of her thighs until her bottom was raised up off the bed, and began to slap her cheeks right where her buttocks met her thighs. He paid special attention to the spot just over her core, knowing each swat jolted her sensitive clit.

He watched her closely as she moaned and jerked in his hold, noting just when the sting became a little too intense and stopping to stroke her heated flesh. He allowed the tips of his fingers to glide between her thighs, teasing her clit and sliding barely inside her.

Pulling his hand away, he began to spank her again, each swat getting closer and closer to her quivering mound. “Should I spank this naughty little pussy?”

“Yes!” she cried, almost mindless in her need.

He let her ass back down on the bed, pressed her legs open, and delivered five firm open-handed swats to her glistening pearl.

Kendra’s mouth opened wide in a gasp as she began to come hard. Derek wasted no time sinking his cock deep inside her just as her inner walls began to clamp down. The fit was incredibly tight; she squeezed his cock hard as he hammered in and out.

Her hands came up to hold his upper arms. Derek felt her continuing to pulse and spasm around him as he drove her from one orgasm straight into another with no respite. Kendra’s nails dug into his arms as she screamed her pleasure hoarsely.

He pulled free from her and flipped her to her belly, raising her hips and fitting the head of his cock to her tight asshole. He grabbed the lube from the pocket of his pants lying next to them on the bed and then sank inside.

After she speaks rudely to Dr. Derek Malcom one time too many, young nurse Kendra Jacoby finds herself in his office at the end of her shift expecting to be fired. But the doctor has other plans, and soon the sassy girl is lying across his lap as her bare bottom is thoroughly spanked.

Kendra is burning with desire by the time the punishment is over, and being brought to a humiliating climax over Derek’s knee only increases her need for him to take her long and hard. But when a powerful winter storm leaves them snowed in together, what will his plans for the night include?

Publisher’s Note: Her Stern Doctor includes spankings and sexual scenes. If such material offends you, please don’t buy this book. This book is also available as part of a five-book collection entitled A Very Naughty Christmas.