Here is an excerpt from Her Stern Doctor part of A Very Naughty Christmas anthology. Happy reading! ~Mo 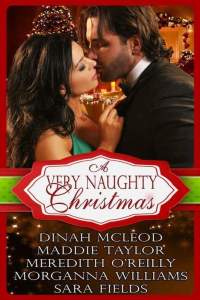 She heard him calling her name behind her, but she didn’t stop. She ran all the way to the door and exploding into the parking lot where she immediately slipped and fell on her already tender bottom.
Kendra sat there a minute and stared around in shock; the parking lot was a sheet of ice and more sharp little shards of it were hitting her in the face. When had this happened? She’d known it was going to snow but she hadn’t heard ice in the advisory.
Strong hands caught her beneath the shoulders and lifted her to her feet. “Back inside, Kendra, you aren’t going anywhere in this.”
She jerked her arm from his grasp with a glare and almost fell again before she caught her balance on the ice. “I am not on the clock, Doctor. I can do what I please.”
Kendra stuck her nose in the air and turned back toward her car, only to be halted before she’d completed a step and hoisted over a broad shoulder.
“You will do exactly as you’re told, young lady. You’re about two seconds from landing back across my knee so I’d tread carefully if I were you. We are going back in the building, I’m going to find out what the weather situation is, and then you and I are going to have a chat about what happened in my office,” he told her firmly as he strode through the door and then locked it behind them.
“Put me down, you jerk! I am perfectly capable of driving home!” she yelled, glaring up at him as he set her on her feet.
Dr. Malcom caught her by the arm, turned her to the side, and landed six hard swats to the seat of her pants, then pointed at the lobby chairs. “You are going to go sit down right now.”
Kendra cupped her hands around her sore bottom cheeks and sent him a sideways glare as she made her way to the chairs. “Asshole,” she muttered under her breath.
Before she could sit, his foot was planted in the seat of a chair, she was unceremoniously tossed face down over his knee, and her pants were once again jerked to half-mast. The good doctor’s hand fell hard and fast, not wasting any time in reigniting the flame in her ass.
Kendra was howling by the third swat and he didn’t stop until she was apologizing with every wail. This time she didn’t get the teasing forays of his fingers when it was over. Instead she was set back on her feet and marched to a corner with her ankles still hobbled by her clothing.
He tilted her tearstained face up to his with a finger beneath her chin. “Now, do you have anything else snarky or rude to say to me, young lady?”
“No, sir,” Kendra said with a little quiver in her chin as fresh tears spilled over her lashes.
“Good. Then you can put your little nose in this corner and keep it there until I come and get you,” he told her sternly as he turned her to face the corner in question.
Kendra started to reach for her pants.
“No… those stay exactly where they are. A little contemplation with your well spanked bottom on display is just what the doctor ordered.”

Her Christmas Daddy, by Dinah McLeod
When Sara Schroder returns home from college to spend Christmas in the town where she grew up, it doesn’t take long for her reckless driving to get her in trouble. But police officer Alex Maxwell—the next-door neighbor she’s had a crush on for years—decides to handle the situation himself, and instead of being given a ticket Sara quickly finds herself over his knee with her bottom bare for the first spanking of her life.

Though the punishment leaves her deeply embarrassed, Sara cannot deny her arousal at being taken in hand so firmly by a man like Alex, and soon she is calling him daddy and delighting in his caring attention and his hard, dominant lovemaking. But can she learn to behave like a good little girl for him or will she spend the holidays with blushing cheeks and a bright red bottom?

Mistletoe Magic, by Maddie Taylor
Dixie Culbertson has seen more than enough heartbreak in her life, and as far as she is concerned, no man can be trusted. But when her old high school crush walks into the diner where she works, the desire she once felt for him is quickly rekindled.

Kyle Prescott has always regretted the misunderstanding that tore him and Dixie apart over a decade ago, but it will take more than just a kiss under the mistletoe to break down the walls she has built around her heart. He is determined to make things right, however, even if that means taking her over his knee for a bare bottom spanking and claiming her so thoroughly that she is left with no doubt that she belongs to him.

Daddy’s Little Elf, by Meredith O’Reilly
When Chloe Carpenter’s husband, Drew, catches her sneaking away to work despite her promise to take time off to allow them to spend Christmas together, he doesn’t hesitate to bare his naughty wife’s bottom and spank her soundly.

After the punishment is over, Drew quickly reminds his little girl that her daddy will always take care of her, and soon Chloe is snuggling in his lap, drinking hot chocolate, and being given a bubble bath. But when he finds out the secret reason she was slipping off to work, will it make him as happy as she hopes?

Her Stern Doctor, by Morganna Williams
After she speaks rudely to Dr. Derek Malcom one time too many, young nurse Kendra Jacoby finds herself in his office at the end of her shift expecting to be fired. But the doctor has other plans, and soon the sassy girl is lying across his lap as her bare bottom is thoroughly spanked.

Kendra is burning with desire by the time the punishment is over, and being brought to a humiliating climax over Derek’s knee only increases her need for him to take her long and hard. But when a powerful winter storm leaves them snowed in together, what will his plans for the night include?

Kept for Christmas, by Sara Fields
After Raina LeBlanc shows up for a meeting unprepared because she was watching naughty videos late at night instead of working, she finds herself in trouble with Dr. Eliot Knight, her stern, handsome boss. He makes it clear that she is in need of strict discipline, and soon she is lying over his knee for a painful, embarrassing bare-bottom spanking.

Though her helpless display of arousal during the punishment fills Raina with shame, she is both excited and comforted when Eliot takes her in his arms after it is over, and when he invites her to spend the upcoming Christmas holiday with him she happily agrees. But is she prepared to offer him the complete submission he demands?