Jeff is here with an excerpt from The Time Traveler’s Journal.This is a wonderful story full of twists and turns and the possibility of love…beautifully written and it begs the question…If you had the ability to change a mistake from the past would you? 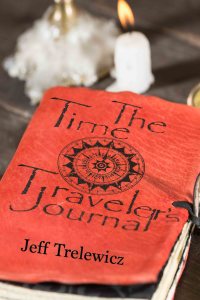 Shane and Catherine exited the building. Their bodies accidently bumping into each other as they walked together. Catherine started to walk towards the parking lot but Shane stopped her.

“The coffee shop is like two blocks away. We could walk there if you want?” he suggested. Catherine glanced up at the sky. The morning sky was blue with large fluffy clouds hanging. She shrugged her shoulders.

“I guess we could do that,” she said quietly. Shane tilted his neck, indicating which way they should walk. They made their way quickly down the sidewalk. Because of the time of day, there wasn’t a lot of people walking. A few cars passed them in the street, but for the most part it was a quiet walk.

Catherine felt her palms get sweaty. Her body was tense as they walked together. She hadn’t felt this nervous about being close to a man since junior high school.

“We’re almost there,” Shane said. She glanced down at her watch.

Shane coughed nervously. “Oh? That. Yeah it’s coming along. I definitely got some good feedback from the kids. Thank you again for setting that up.”

Catherine smiled at him. “Of course. I’m glad to help. I just want a special thanks in your best seller when it comes out,” she joked. He forced a nervous smile at her. “So? When am I going to get to read it?”

Again, Shane let out a small cough. “I’m not sure that it’s anywhere near that ready yet. But I promise you, that uh, you’ll be the first to read it.”

“Not your editor?” she questioned.

Shane thought for a second. “Of course the editor will get it first. But after he gets it, you will get it. That’s a promise.” They walked in silence for another minute. “Here we are,” Shane said. He pointed to a small brick building with a neon sign that read “Kelly’s Coffee Shop.” Shane reached with his right hand and opened the door. He held it open “After you?”

“Such a gentleman,” Catherine remarked. She walked up the small stone step and into the shop. The shop was a small room. There were a few tables set up around the room. Behind the counter stood Kelly Barker, an older woman. Kelly wore a hairnet over her greying hair. She was gently chewing on some gum.

“Good morning folks. What can I get you?” Kelly asked.

Catherine looked at the chalk board to the left of Kelly that had the menu on it. “I will have a large coffee, two creams one sugar and a drop of peppermint?”

Catherine reached for her purse which was on her right shoulder. Shane reached his hand out and gently grabbed her wrist. “No. It’s on me. And don’t argue with me,” he said with a grin. Catherine immediately dropped her hand.

“So pushy,” Catherine grinned. “Thank you.”

Shane nodded his head. “And I will have an espresso. Medium sized?”

“Coming right up,” Kelly responded. She typed it into the cash register. Shane reached into his pocket and pulled out his wallet. He grabbed his credit card and pushed it on the counter. Kelly smiled as she picked the credit card and swiped it. “It will be just a minute. If you want to have a seat, I can bring it right to you?”

“That would be great. Thank you,” Catherine said. She turned around. There was only one other person seated in the shop. “Shall we?” Shane followed her. Catherine picked a table near the front of the shop. Shane ran around her quickly and pulled out her chair. “Okay, seriously? Opening doors. Buying me drinks. Pulling out my chair? You’re too much,” she smiled. Catherine sat down. Shane’s hand made contact with her shoulder. Before he could pull it away, Catherine’s hand grasped his hand for a few seconds. She glanced over her shoulder and smiled at him.

Shane pushed her chair in and walked to the other side of the square table. He pulled his chair out and quickly sat down. There was an awkward moment of silence between the two of them.

“So? Mr. Catherine?” Shane started to say. “Uh, Jake? Tell me about him?” There was a brief grimace of pain on Catherine’s face.

“He’s an assistant banker at Ford-Fisher bank downtown,” Catherine said. She shrugged her shoulders. “We’ve been married for the past eight years. I… I don’t know what else there is to tell.”

“You are shameless, do you know that?” Catherine grins. “Yeah, he’s all right.” She joked. “Six foot two, brown hair and a goatee.”

Shane frowned. “Ahh, so you like them tall do you? That’s a shame.” Catherine looked at him with a perplexed look on her face. “I’m only five ten. He’s got a good four inches on me. It’s a shame for me. That’s why.”

Catherine could feel her cheeks blush. Their eyes locked for five seconds. Catherine was the first one to look away. Kelly appeared carrying a tray with two coffees on it. Shane’s credit card was also on the tray. She set it down between them on the table.

“There you go,” Kelly said. Both thanked Kelly before she walked away. Shane grabbed his credit card and put it back in his pocket.

“Thank you for the coffee,” Catherine said quickly. The steam poured out of her paper cup. She pressed it to her lips, but quickly pulled it away. “Ow!”

“Burn your lip?” Catherine nodded her head. “Sorry.” Shane picked up his cup and lightly blew on it. Catherine playfully stuck her tongue out at him.

Catherine glanced down at her watch. “Oh shit, I think I’m going to be late if I don’t leave soon.”

“You should make the students wait a few extra minutes, that’s what I think,” Shane chuckled.

“You’d like that wouldn’t you?” Shane nodded his head. “I don’t know if my bosses would like it though.”

“You don’t have to tell them,” Shane shrugged his shoulders. “Well it was worth a shot on my part right?” Catherine smiled at him. Shane jumped to his feet. “At least we have coffee for the road.” Catherine smiled at him and stood up from her seat. Shane tilted his head, gesturing to the door. “Shall we?” With his left hand, Shane grabbed his cup of coffee off the table. Catherine nodded, grabbing her coffee as well. Shane waved at Kelly as they made their way out of the shop and walked down the steps.

A few short minutes later they were standing in front of Shane’s apartment complex again. Catherine stood two feet away from him. They just looked at each other for a moment, neither of them sure what to say.

Catherine finally broke the ice. “So? Meeting tonight right?” Shane nodded his head. “Well then I guess I will see you there. Have a good day” Catherine smiled at him again. Shane grabbed her quickly, embracing her close to him. At first she was shocked by it, but she responded by wrapping her arms around his waist.

Shane released her. He looked at her sheepishly. “I’m sorry. I.. I uh shouldn’t have done that.”

Catherine bit down on her lower lip. “No, it was fine. Don’t worry about it. Bye. See you tonight.” Catherine turned around and made her way to the small parking lot on the other side of the building. Shane watched her for a moment before entering the building.

Catherine walked quickly to her car. She reached into her pocket and pulled out the keys, unlocking the door. She sat down in the seat. She could feel herself blush for a moment before she started the car.

Professor Catherine Donato just met Shane Barr, who is working on his first novel. She is immediately drawn to him despite her best efforts to resist his charm. He needs the help of her smartest students to get the science of his book right. The closer they get to helping Shane, the more it doesn’t add up. What secrets lay in the Time Traveler’s Journal? Come along with them on a journey that will change everything. But remember what happens tomorrow can change today, permanently

I thoroughly enjoyed this book. Its a great sci-fi/paranormal read. This is not a spanking romance its just a wonderful read! Happy Reading! ~Morganna