I’m so happy to have you on today Judith, I’m i the middle of reading Nadja’s Choice now and I’ve got to say its fantastic! You seduce the reader right along with Nadja. Hot stuff peoples! You better do like me and one-click right away cause you sure don’t want to miss this one! Okay Judith let’s get right to the nitty gritty. Look into the bright light and answer my questions. 🙂

Morganna-What do you think at your core makes you write? Is it a need or something you enjoy as a hobby?

Judith-Writing for me is a need, it’s something I have to do to. I’m so thankful to all my readers for supporting me in this, I really appreciate all of them.

Morganna-I actually feel the same way so ditto that! Do you think a person is born with Dom/sub traits/needs or is it learned or a mixture of the two?

Judith-I think a person is born with certain traits that lean them in a certain direction to being a Dom or a sub. I also think there are those who are versatile and cam be switches and also those in the lifestyle, who don’t have Dom / sub desires, who just like to spank and those who like to be spanked

Morganna-Makes total sense to me! What is your greatest fear as a writer? Greatest joy as a writer?

Judith- I think my greatest fear as a writer is not finishing what I started, being able to finally finish a novel was a huge accomplishment to me. My greatest joy is hearing from my fans, I love getting emails and messages from my readers

Morganna-You have a lot of fans, including myself. 🙂 What’s your ideal writing situation/environment?

Judith-I think everyone has their own ideal. I like to have music playing while I’m writing and usually write on my bed, sitting Indian style with my laptop…LOL

Morganna-You like to be comfortable when you create, comfort is important when your’re trying to get the imagination flowing. Okay, last question. What’s one fun factoid about you that few are privy to that would surprise your readers?

Judith-Fun factoid : I wrote my first story in the first grade, so I guess I’ve always been a writer smile. 🙂

Morganna-Thank you so much Judith for taking the time to answer my questions.

Judith-I enjoyed it. Thanks for having me over to visit!

And without further chatter, on with the show! 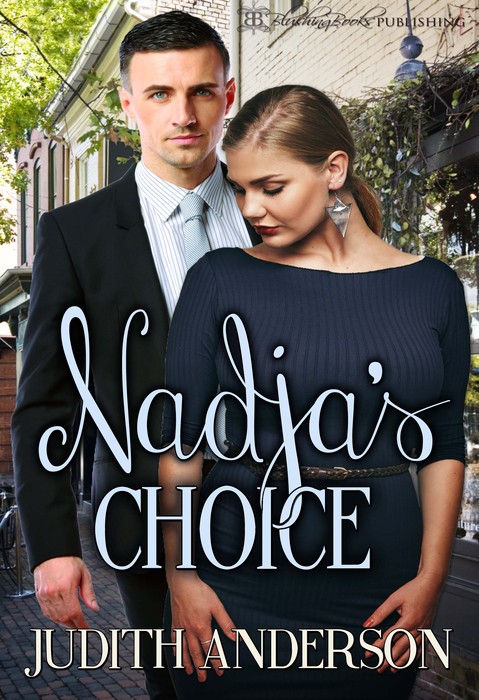 “Nadja’s Choice” is the story of Jack Avery, a computer technician and recent transplant from the big city to small town Flaxville, where he meets Nadja Koenig, the town librarian. Jack moved to get away from the city, but there other things he hopes also to have left behind…

Nadja, a voluptuous woman with charming simple beauty, just wants her library—her sanctuary away from home—to remain the familiar place she grew up knowing and loving. But when she sees all the technological changes coming, will it be the same place for her? She feels threatened by Jack’s plans to install a computerized check out system, but is intrigued by his air of command and self-assured confidence.

The two can’t deny their chemistry, even though they’re both from different worlds and want different things, but as they begin to date, more and more obstacles seem to spring up.

Larry Billings dated Nadja for a while in the past, and his interest in her has never waned. He wants to rekindle the flame, but now Jack, a suspicious city boy, is in his way. What lengths will Larry go to, to claim what he thinks is his?

The soft rain was coming down steadily, landing on the tree-lined streets and running in rivulets down the side of the curb. Children raced from the stickball game they were playing in the middle of the road, hoping the rain would stop soon. Mothers came out to their porches to check and make sure children were all present and accounted for. The precipitation the children complained about put a smile on the farmers’ faces. It had been a dry season in the flat Great Plains, and they hoped the downpour would be enough to put some moisture in their crops.

Dark clouds brooded through the Midwestern sky; she could see them from her vantage point on his bed. She could hear the rain ping against the window, the sound was hypnotic. She always loved how the drops would fall against the glass and then run down in random paths, repetitive but different, soothing, like watching a campfire. The sky was all she could see outside his window, since her wrists were tied to the headboard. He had just finished restraining her and double checked his knots to make sure she was secure without being tight enough to cut off her circulation. Once satisfied, he turned to the dresser to choose which clamps and clothespins he wanted to apply to her body.

This was the worst part. The waiting. And he knew it. She was naked, tied up and vulnerable on his bed, and all she could do was wait in delicious suspense. Wait while he picked out what he was going to torture her with.

He came back with some clothespins. “We’ll start off with these today,” he said and gently pinched some skin above her nipple. He opened the clothespin and applied it to the pinched flesh. The initial ‘ow’ subsided and her nipple hardened in anticipation. He licked his lips and did the same to her other breast.

“Oh for heaven’s sake,” he said and walked back to the dresser, returning with a blindfold. “I forgot how much you love this.”

She lifted her head to let him put the blindfold on her. Now, in complete darkness, she could relax and relinquish control. She loved the mystery and the trust that existed for this to happen. She took a few deep breaths and waited for the remainder of the clothespins to be put on her body.

He savored the sight of her there and knew that things were going to get much better.

Super Hot! I know I’m not alone in thinking so either! So join me in clicking on the buy link below! You know you want too! Happy Reading! ~Morganna
Buy link Amazon:
http://www.amazon.com/Nadjas-Choice-Judith-Anderson-ebook/dp/B01AIXIK7I/ref=sr_1_9?s=books&ie=UTF8&qid=1452694330&sr=1-9&keywords=judith+anderson
Advertisement