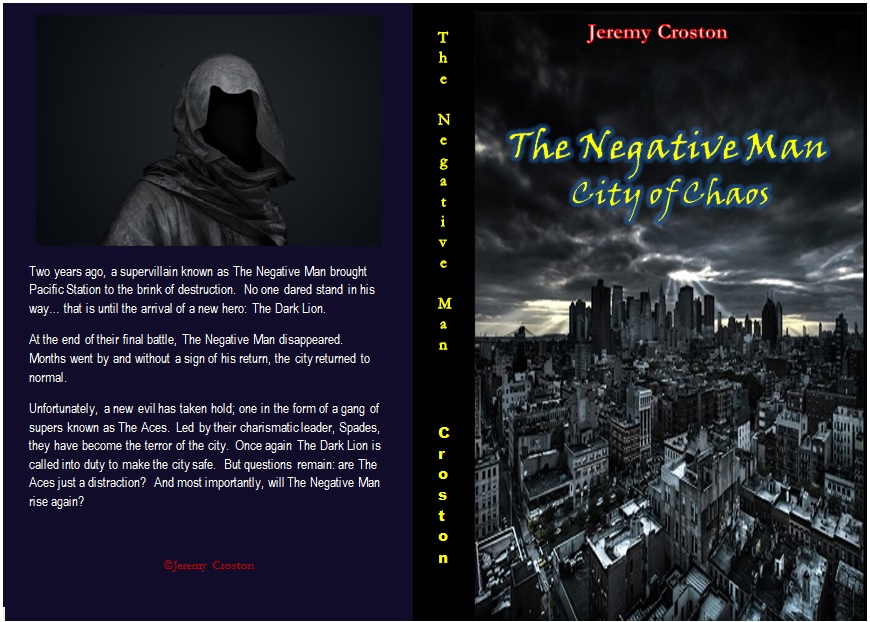 Blurb: “With a city at war, turning to evil may be their only choice.”

Two years ago, a supervillain known as The Negative Man brought Pacific Station to the brink of destruction. No one dared stand in his way… that is until the arrival of a new hero: The Dark Lion.

At the end of their final battle, The Negative Man disappeared. Months went by and without a sign of his return, the city returned to normal. Unfortunately, a new evil has taken hold; one in the form of a gang of supers known as The Aces. Led by their charismatic leader, Spades, they have become the terror of the city.

Once again The Dark Lion is called into duty to make the city safe. But questions remain: are The Aces just a distraction? And most importantly, will The Negative Man rise again?

The screen flashed right to PSPD Chief Harvey Grimes talking about the disturbance the night before. Geri was in the process of grilling him about the activities the night before. “So you’re okay with The Dark Lion killing one of The Aces? Shouldn’t he be arrested for murder?”

Grimes voice was like a growl from a large bear. A very angry bear that was interrupted from hibernating. “Murder? The man did us a public service! If he puts those other three assholes six feet under, I’ll personally give him the key to the city!”

Murmurs broke out amongst the reporters. Paisley asked a pretty shocking follow up. “Let me get this straight? You’re okay with The Dark Lion, or any of the other super powered vigilantes killing criminals? What about due process?”

“When will you prissy idiots understand?” He slammed his hand on the podium. “These super powered criminals have declared war on Pacific Station! For all we know The Negative Man’s behind this! The only place these criminals can’t hurt us is with their dead bodies in wood boxes!”

I flicked the TV off, a bit shocked by how far Chief Grimes was willing to go. Any hopes of talking DL out of killing anymore of those villains just went out the door. Over the past few weeks, I’d been getting frustrated with his lethal force. I thought we were better than that. Getting ready, I hopped in my car and headed back to the office.