Synopsis
Melissa Toselli is a wild child with a troubled past. Having been on her own since she was fifteen she is desperate to find the one who will take her into his arms, heart, and control. She has a tendency to pick all the wrong men for all the wrong reasons.

Unbeknownst to Melissa she has caught Corbin’s Bend newbie, Jason Donovan’s, attention. The wild spitfire stirred something inside of him that he could not let go. He could see right through Melissa’s devil may care attitude to the vulnerable child within who just needed someone to care for and watch out for her. She was crying out for some guidance; both the kind that would tuck her in at night and the kind that would take her over a knee for some much needed discipline and structure.

Can Jason give Melissa what she needs and tame the wild child that she is? Can he show her the way a true gentleman treats the woman he has feelings for? Will Melissa turn out to be too much for Jason to handle? Will she fall back into her old ways? Or will Jason and Melissa find exactly what their looking for in each other?

Setting her down on the sofa, he sat next to her. He should probably let her sober up the rest of the way before having this conversation. Taking in the firm set of her jaw and ramrod straight line of her spine, she was obviously ready to have this out now. “What were you thinking, Melissa?” He started as gently as he could, but could feel all of his earlier emotions begin to boil again.
Melissa obviously felt them too because she immediately went on the defensive. Her eyes flashed. “You think there’s something wrong with going out dancing?”
He leveled his eyes on hers. “Is that really the stance you want to take right now?”
“Why not?” she spat. “I went out to have some fun. While I admit it got a little out of control, it’s over now. As you can see, I’m fine.”
His mouth dropped open in dismay. “A little out of control,” he sputtered. “Melissa, if I hadn’t found you, who knows what would have happened to you.” He clenched his fists. “You were passed out against a wall for God’s sake.”
“So what are you going to do about it?” she dared him.
Shock zinged through him as her words sunk in. He didn’t know what had gotten into his normally level-headed friend, but this was not a dare he was going to resist. “Melissa, so help me you are about to wind up panties down, bottom up over my knee if you don’t take this conversation seriously, starting now.”
“Oh, I’m taking it seriously, Jason,” she answered back, the fire gone from her voice. “I just think you’re exactly like everyone else in this community. You talk a big game, rushing in to rescue me, but you’re afraid to put your money where your mouth is and give me what I really need.”
Was she really daring him to spank her? Did she honestly think he wouldn’t follow through? His mind scrambled to keep up with the turn of events along with any potential ramifications, but there was no doubt in his mind that before this night was over she would be getting exactly what she asked for.
“Are you going to spank me or what?” she asked, a fierce bravado flashing in her eyes.
He shook his head at the sheer courage she could muster at the blink of an eye. He stood, pulling her with him. Crooking a finger under her chin, he lifted it so that he could look into her shining eyes. “Oh, I’m going to blister your bottom all right,” he said, lowering his voice, allowing the energy to sizzle between them for a few heartbeats. He ran his hands down her arms noticing the little shiver she gave at the contact. “But not yet.” He could see how desperately she needed to gather her thoughts. There would be no spanking until he determined that she was sober and in a better frame of mind. Turning her toward the bathroom, he gave her bottom a soft smack. “Take a shower. We’ll talk when you’re done.” She gave a little squeak, but headed in the direction he sent her.

Wooo hooo! That was HOT! I know I'm getting my copy today! That is definitely going on my TBR list! What about you? Come on click on one of the nifty links below, you know you want to! Happy reading! ~Morganna 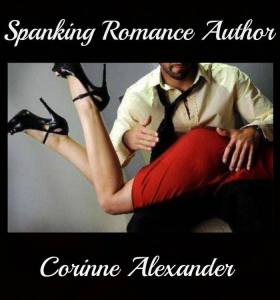