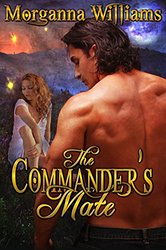 Today I thought I’d share and excerpt from my first book The Commander’s Mate.  Izzy just woke up and remembered she’s mated to a large Ramelian with a penchant for spanking. What’s a girl to do? Happy reading~Morganna

Izzy smiled and stretched as she woke cocooned in warmth, then froze when she realized her movements were restricted by the large body wrapped around her own. A male arm wrapped her torso and a heavy leg was thrown across her lower half, leaving her pinned rather possessively to his large body.

She tried not to panic, but then she felt the hot press of his morning arousal against the side of her hip. It was huge! Long and thicker than her wrist; there was no way her body could accommodate such a monster.

Izzy started trying to scoot out from under him in an effort to escape the inevitable and couldn’t suppress a gasp as her tender bottom slid across the sheets. He’d spanked her like a naughty child and then they’d examined her like a brood mare!

Calling him a foul name under her breath, Izzy tried again to slip out from under him, only to gasp in dismay when his hold tightened and he pulled her to lie on top of him.

She barely had a moment to register he was awake before his hand landed on her now exposed backside with a resounding smack that echoed through the room.

“Owww!” Izzy cried, frantically reaching back with both hands to shield her poor bottom from further assault. She’d never thought spanking sounded like a big deal before, but it hurt! Was he going to spank her every time she voiced a thought or opinion?

“I will tolerate neither disrespect nor foul language from you, little fire. Best you learn this lesson quickly for the sake of your bottom,” Grayson said firmly.

“Let me up,” she commanded softly, looking away from him.

“I think it best we lay your fears regarding sex play to rest this morning, little fire. It is time to take you fully and cement our bonded state.”

A deep chuckle was Grayson’s only response as he rolled her swiftly beneath him on the bed.

This time she screamed and began fighting like a wild dervish, so great was her panic.

“There is no need for such drama, Isabella. I will not harm you. I promise by the time I join our bodies, you will be begging for my possession.” Grayson frowned as the words he’d intended to reassure her only renewed her struggles with increased desperation.

Grayson was curious instead as to how it could be possible for a woman of her age to still be untouched. “How is it possible you’ve never known the touch of a man, little fire? You are fair of figure and face, how is it no man has breached you as of yet? Your society is known to be freely sharing of their bodies with one another.”

If possible, her body got even stiffer as her back became rigid. “Not everyone is lacking in morals! I always thought to fall in love and sleep with one man. The opportunity just hasn’t happened because despite the fact that you like to call me little, I’m not. I’m fat and unattractive to the men of my world.”

Grayson sat up with a scowl, sitting Izzy on her knees between his thick thighs. “While it is possible the men of your planet are idiots, I will not hear such drivel from your lips again. You’re perfect as you are.”

When Izzy snorted in response, she found herself tossed across his strong left thigh as his hand began to fall with vigor on her cringing bottom.

“I will not hear you call yourself fat or unattractive again, Isabella. You are everything I could have wanted. I can’t wait to lose myself in your lush curves and your lovely face enchants me. Everything about you is beautiful; I even enjoy your penchant for defiance.” Grayson stopped after twenty well-placed swats; this was only a warning and he had other things to show her this morning.

Izzy’s sniffles turned to sighs as his warm hand began to stroke across her punished flesh with broad sweeping strokes, bringing him ever closer to the juncture between her thighs.

His broad palm cupped the inside of one of her legs and drew it over to hang on the other side of his thigh, opening her up to him. Grayson lightly skimmed his fingertips across her wet center. “Little fire, you are already wet for me,” he told her as he pierced her deeply with the smooth thrust of one thick finger.

Izzy mewled in protest, but he felt her body clamping down on his finger as if to welcome it. She gasped as Grayson began to move his finger slowly in and out of her hot channel, her legs spreading further apart in unconscious invitation. His finger began pumping faster as he watched her body tighten, then his thumb stroked across the center of her pleasure and the tension released like a snapped rubber band.

Pressing her face into the bedding, Izzy bit her lip as the pleasure of his touch consumed her; she’d never known such intense pleasure. The few times she’d tried touching herself were nothing compared to his touch.

She gave a soft little scream as her body contracted around his finger. He continued working his finger in and out of her and stroking her clit to wring as much pleasure from her as he could.

Before she could recover from her first orgasm, he shifted her to her back with her legs hanging over the end of the bed. Izzy protested weakly when he knelt on the floor between her spread thighs and lifted her legs to rest on his broad shoulders.

She tried to close her legs, but he was already between them using one hand on her belly to hold her down as the fingers of his other hand spread her labia open. He studied her for a moment before lowering his head to run his tongue up one side and down the other, studiously avoiding her little pearl.

The palm resting on her stomach moved down to the top of her mound, pressing down rhythmically against her clit as he used his other hand to stretch the skin taut around her channel to intensify the feeling of his tongue as he rimmed her then plunged back inside forcefully.

Soon her hips were rising to meet each thrust of his tongue as she built quickly to another release more shattering than the last. As she cried out his name, Grayson thrust two fingers hard into her still spasming channel, wrapped his lips around her little clit, and sucked.

Don’t forget to visit the other blogs in the Spanking A-Z Challenge!

6 thoughts on “I is for Izzy- Spanking A-Z Challenge!”